A grey squirrel has bitten more than a dozen people in a town in Wales, drawing blood on several occasions. The town was forced to leap into action to put an end to the mischief. Pest control in London and elsewhere is essential because even the most endearing small mammals can pose a danger to health, homes and businesses. Pest control is always a process that is best handled by professionals, as the story of Stripe below shows. 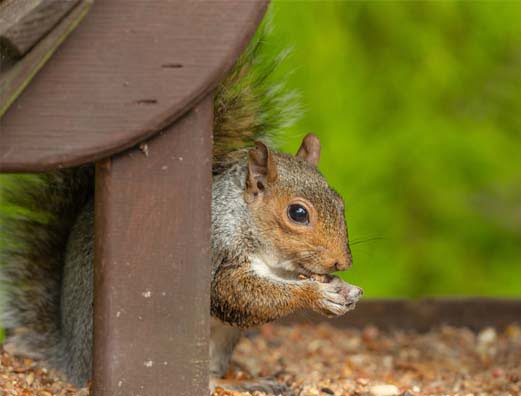 The story of Stripe started when the squirrel was fed treats by Corrine Reynolds, an animal lover who spotted him in her garden. But things turned sour when the squirrel began to develop tendencies to bite the hand that was feeding him.

Stripe began to nip at Reynolds and her neighbours and, on several occasions, even drew blood. Reynolds was forced to take action and caught the critter in a humane way so he could be taken away by the RSPCA.

Reynolds said that she began feeding the squirrel in the summer, and for months he was a frequent visitor to her garden. But although she enjoyed watching him scamper around, his attitude towards her changed over time.

She reported the incident on her local social media group and was surprised to find out that Stripe had also bitten others. In fact, eighteen people had been attacked in as little as 48 hours. Far from simply attacking people who approached him, the squirrel began to ambush people who were simply going about their business.

Some injuries were severe enough to warrant medical attention. One neighbour, Scott Felton, said that he was just having a cigarette at his back door when the squirrel suddenly pounced on him. The squirrel came out of nowhere, he recalls. It jumped on his arm and bit his hand before he’d even had the chance to brush it off. He was forced to go to the hospital for a tetanus shot.

Sheree Robinson was also a victim of Stripe’s change in behaviour. She knew that the bitey squirrel had attacked five or six of her neighbours but never suspected she would be next. She was just collecting her recycling bags when he jumped out from behind her green bin and bit her on her finger. She had to shake him off before he would let her go, and only then did he scurry away.

The squirrel was also known to have attacked pets. One resident said her two Bengal cats had become intimidated, although they weren’t usually afraid of anything. She herself admitted to preferring to be inside the house when she knew the squirrel was lurking around the corner.

After hearing all these reports, Reynolds felt she had to take some action and bought a humane trap to catch the rascal. When she caught him, she called the RSPCA, who took him away. Sadly, there’s no happy ending because it’s illegal to release a caught grey squirrel into the wild. They said that they were sorry to have put the squirrel down, but there was no other option.

British Pest Control says that it is very rare for a grey squirrel to bite a human being, but if it does happen to you, you should seek immediate medical attention because squirrels can carry disease.

Pests in Other Parts of the Country

Pest control in London is feeling the pressure because many outlets in the city are experiencing infestations. In part, this could be a result of vermin growing in courage and seeking new sources of food after the pandemic restrictions led to emptier streets. A popular restaurant in West London has become the topic of heated online debates after a video emerged of a mouse running free inside after closing time.

The video was taken through the property’s front window and shows the mouse underneath the stools in front of the premises. When the person taking the video moved closer, the mouse seemed to have been startled and backed off to a low shelf where packets of popcorn were being stored.

When the cameraman went closer still, the mouse ran between the shelf and the fridge and then went out of sight. Some commenters remarked that this would be enough to put them off whatever they were currently eating.

However, others defended the restaurant, stating that pests are simply a matter of fact in a big city and eradicating them completely is next to impossible.

Meanwhile, a kebab shop in Enfield was prosecuted when health and safety officials found that the place was swarming with cockroaches and was infested with rats. The restaurant is now closed, and the company director, Kazim Recber, and the parent company were found guilty of 15 health and safety offences.

When inspectors entered the restaurant, they found swarms of cockroaches within minutes and identified multiple hygiene failures. Enfield Council’s Cabinet Member for Licensing and Regulatory Services, Cllr George Savva, said that the place was genuinely disgusting. There was also evidence that the pests had managed to get into food supplies, food preparation and food storage areas.

The huge population of cockroaches posed a risk to public health, and their presence implied inadequate cleaning practices, with dirt and food debris littered around. Cockroach faeces was also found in both food storage and preparation areas.

To rectify the situation, the owner closed the shop for a few weeks, after which the council officers inspected the restaurant again, eventually deciding it should be allowed to open again. But after routine checks a few months later, they found a rat infestation on the premises.

This was enough for the Council to conclude there was strong evidence that the business was unable to control pests. The owners were fined £436 and ordered to pay half of the Council’s costs of £3,283.12 and a victim surcharge of £43 each, coming to a total of £4,241.12.

Pest Control for Your Home and Businesses

Business owners do have a lot on their hands, and it can be easy to let standards slip. But if you want to keep your business or your home pest free, you can schedule a regular appointment with your neighbourhood pest control company.

Environ Pest Control London won’t just remove pests from your building. We can also put proactive measures in place to prevent them from coming back. We also offer damp proofing, restoration services, window repair, and even roofing services.

Let us know what services you need by calling us today. We’ll be delighted to help you.

To learn more about what we do, go to our homepage at www.environpestcontrol.co.uk.